The legal basis of JRA lies in the Horseracing Law and the Japan Racing Association Law. The JRA was established in 1954 as a public entity to ensure the integrity of horseracing and the development and improvement in the breeding of racehorses and other livestock. The JRA operates horseracing under the supervision of the Ministry of Agriculture, Forestry and Fisheries. 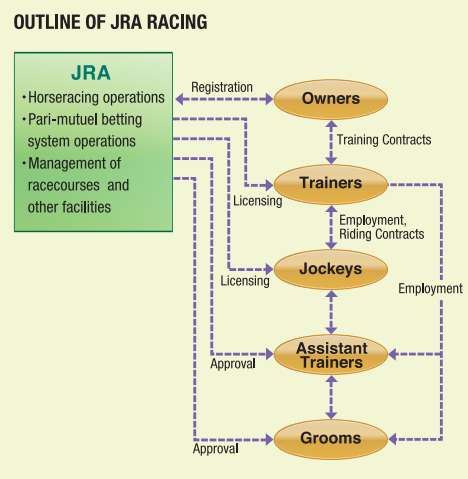 The Board of Governors, comprising of six council members appointed by the Minister for Agriculture, Forestry and Fisheries and the President & CEO of JRA, has been in place since 2007. The Board of Governors sets key operation items such as JRA's basic management policies and makes final decisions on budgets and business planning. It is also involved in supervising the duties of executives. The Management Advisory Council assists the President & CEO, consisting of 10 members drawn from owners, trainers, jockeys and academics appointed by the President & CEO, with the approval of the Minister. It reviews and discusses items of importance to the business management of JRA.

The Horseracing Adjudication Council meets for official deliberations on the registration of owners, licensing of trainers and jockeys, and appeals filed against racing decisions under the Law of Administrative Tribunals.

The main office of JRA which is located in Tokyo, acts as the nerve center for the nationwide network of 10 racecourses, the 39 off-course betting facilities called 'WINS' and other JRA related entities, and engages in activities concerning the direct or indirect development and operation of national horseracing. 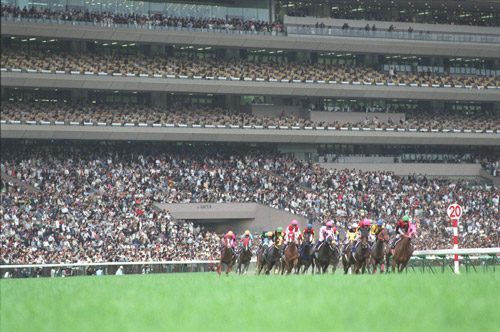 JRA’s livestock development promotion initiatives adapt appropriately to the conditions and needs of the prevailing times. Every year, the JRA organizes an open call for suggestions for a project to support based on a particular theme determined in advance, collects related suggestions, and accordingly decides on a project to support. To date, the JRA has provided financial assistance to projects that support livestock restoration in disaster-stricken areas, and projects that aim to prevent livestock diseases from spreading.

The Japan Racing Association Act stipulates that roughly one quarter of the national treasury payments made from JRA-generated revenue must be used for expenses needed to promote social welfare projects, and accordingly be allocated toward beneficial causes by the government. In addition, in order to fulfill its social responsibility as a horse racing organization, the National Horse Racing Welfare Foundation withholds a portion of the prize money for races allocated toward horse owners as funds to provide financial support to social welfare projects across Japan.

Smooth operation of JRA races requires the understanding and cooperation of local communities around racecourses, off‐course betting facilities, and training centers. For this reason, the JRA has established a budget for environmental maintenance initiatives, and it works to alleviate various problems such as traffic congestions and illegal parking when races are held. These activities are not only part of the JRA’s efforts to fulfill its social responsibility toward local communities, but they also aim to reduce negative effects of holding horseracing on the living environment of residents in surrounding neighborhoods. The budget for environmental maintenance initiatives is used to make general donations to environmental maintenance projects led by local governments where racecourses, off‐course betting facilities and training centers are located. Specifically, the JRA makes large donations to projects that improve the environment of local communities, with funds being used for activities such as maintaining roads and sidewalks, parks, and schools in relevant neighborhoods.

To contribute to the sustainable development of society via the operation of an environment-friendly horseracing business, the JRA proactively works to implement the following:

In terms of “measures to reduce various types of waste,” the JRA has conducted waste recycling activities under the name JRA ­ RAP (Recycle Action Program) since 1998. Under JRA - RAP, the JRA aims to recycle over 90% of the annual waste generated by JRA business activities.

With regard to “measures to reduce greenhouse gases (CO2),” the JRA promotes a reduction in energy use by curbing energy consumption (through power-saving practices, etc.) and installing energy-efficient equipment. In particular, the JRA has continued to implement power-saving measures since the electricity supply tightened in the wake of the Great East Japan Earthquake in 2011, and its energy consumption in 2016 had declined to 75.2% of the level in 2010 (one year prior to the earthquake). In addition, the JRA has switched to LED lighting and installed energy-efficient air conditioning at its facilities, and it works to improve areas such as natural lighting and ventilation when making large-scale upgrades to its racecourses and other facilities.

Turning to the “utilization of renewable energy,” the JRA has worked to introduce solar power systems with the aim of making contributions in areas such as “responding to environmental problems,” “optimizing business operations,” and “achieving harmony with local communities.” The JRA has installed solar power systems at its major racecourses since 2013.

In addition to contributing to the public in the ways described above, the JRA also provides financial support to regions that have suffered major damages from natural disasters such as earthquakes, typhoons, heavy rains, as well as donations to support those affected from the novel coronavirus disease (COVID-19).